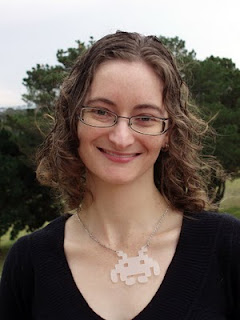 Jo Anderton
New Australian author Jo Anderton has signed to Angry Robot for at least two novels in her Veiled Worlds series. The worldwide deal, covering physical books and eBooks, was done by agent Anni Haig-Smith and Angry Robot’s publishing director, Marc Gascoigne. Debris will be published in the autumn of 2011, with direct sequel Suited scheduled to follow in early-to-mid 2012.

Series opener Debris introduces us to Tanyana, leader of a matter-manipulating team. Following an accident, she’s dismayed to be demoted to little more than a garbage collector, but it soon becomes obvious she’s been manipulated into that role by the faceless faction she calls the Puppet Men, to uncover a world-shattering secret.

That man Marc Gascoigne said, “With the ever-increasing popularity of Japanese and Korean anime, manga and computer games, it’s been surprising that there hasn’t been more SF and fantasy showing its influence. Debris’s mix of SF and fantasy themes, exotic future-medieval settings, Dune-esque warring factions, and a fabulous kick-ass heroine is exactly the sort of on-trend science fiction Angry Robot was set up to publish. We’re damned pleased to have Jo on board.”

Jo added, “I’ve been reading Angry Robot books since their first giant, metallic steps and absolutely loving them. Debris started out as an idea about a magical version of the industrial revolution and a scarred garbage collector who saves the world, but still has to pay her rent. Add a few motley companions, a pinch of probably-misinterpreted quantum physics, and far too much time spent in front of various Final Fantasy video games. I’m thrilled my books have found a home at Angry Robot.”

Then, new announcement about Matthew Hughes: 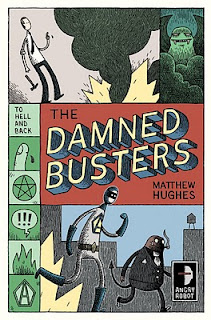 With all the new author news around here recently and prepping/raising alcohol tolerances for Fantasycon, we’ve had to keep this under wraps for a few weeks. Which has been a struggle, because this is so damn cute.


Yes, it’s the cover for Matthew Hughes‘ first Angry Robot novel, The Damned Busters. The artist is the wonderful Tom Gauld, who you may know for his great editorial cartoons in, for example, The Guardian newspaper’s book review section. He’s only done a few book covers, most recently for the US edition of the Neil Gaiman- and Al Sarrantonio-curated Stories anthology, but maybe we can change that.

And as you can see, the cover pretty much tells you the set-up of the novel. Mild-manned insurance actuary Chesney Arnstruther accidentally summons a demon, and by hook or by crook ends up with his heart’s desire – to be a superhero. But as we all know, it’s not always wise to get what one wishes for…

Complete with lovely Angry Robot logo, the book, volume one of the To Hell and Back series, will be in stores and for download May/June next year. The sequels will also have covers by Tom, because, well, he’s bloody great.