Early this morning, the publishing geniuses at Angry Robot finally announced the news they'd been teasing us with, a new sister imprint called Exhibit A, which will publish genre crime fiction.  Here's the press release:

Angry Robot, the award-winning publisher of what it calls SF, F and WTF?!, is pleased to announce its newest venture – a sister imprint, Exhibit A, which will publish crime genre fiction.
The imprint will launch in late Spring 2013, with two titles appearing in each of the first two months, before settling down to one book each month. Exhibit A will follow AR’s strategy of co-publishing its books simultaneously in both the UK and US, in both paperback and eBook formats, backed up by strong online marketing and community activity.
Exhibit A’s ambition is to become an addictive new home for addictive crime fiction. It will be looking for authors with original, gripping voices. Exhibit A books – whether they’re procedurals, mysteries, thrillers, or something entirely new – will aim to divert readers from their everyday lives into an exhilarating world of drama, fear and suspense. 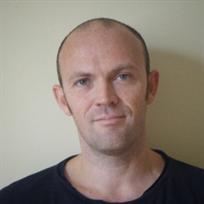 Joining the company to run the imprint is Emlyn Rees. He published his first crime novel aged twenty-five, his second a year later, and then co-wrote seven comedies with Josie Lloyd, including the Sunday Times bestseller Come Together. In his time, Emlyn has also worked for the Curtis Brown literary agency and run a manuscript editing service.
Angry Robot’s managing director, Marc Gascoigne, said: “Passion, a flair for innovation and a keen sense of what readers want – that’s what has driven Angry Robot’s success so far, and it’s what Emlyn Rees will bring to our new imprint too. We’re overjoyed to have him on board.  With our YA imprint Strange Chemistry launching this September, and now Exhibit A due next spring, our growth plans are shaping up very nicely indeed.”
Emlyn Rees commented, “Angry Robot is an exciting and innovative new publisher, with a terrific track record for breaking out fresh talent and bringing great authors and readers closer together. I’m delighted to be joining the team and can’t wait to set about building a list of talented crime writers we can be proud of and passionate about. I want Exhibit A to become an eye-catching new focal point for compelling crime fiction and the crime fiction community.”
The launch of Exhibit A is the latest in a wave of expansion by parent company, Osprey Group, following investment by Alcuin Capital Partners in 2011. Osprey recently won the IPG Award for Specialist Consumer Publisher of the Year 2012.
---------------
So, with Strange Chemistry launching in September to bring Amazing Things to YA readers everywhere and now Exhibit A set to Rock the World of crime fiction next Spring, you surely have to be asking yourseles... whatever will those crazy Robots think of next?
To which we say... stand by for further announcements.
.........
Slowly but surely, the Robot Overlords are expanding their dominion!
Posted by benito at 2:47 PM