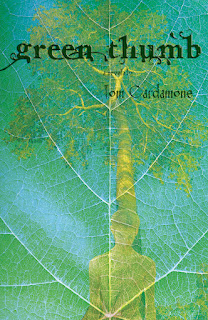 Mutability blooms in the Florida Keys after the Red War. The genie boxes created King Pelicans with single human hands to rule the ruins of half-drowned Miami…and other, stranger persons. Slavers roam the deep waters offshore, taking captives to feed the voracious Kudzu Army and the human aqueduct bearing fresh water from Lake Okeechobee. On the last stretch of the Overseas Highway still standing, an albino seeress prophesies: “You will reach for the sun while staying rooted to the ground. But I fear your shadow will be much too long.”

Misunderstanding time, Leaf has lived for decades alone in a collapsing Victorian house on a desolate sandy key, feeding on sunlight and dew. When at last he meets a boy like—but so unlike!—himself, Leaf’s startling journey begins.


And what an journey it is!  What Tom Cardamone has achieved with Green Thumb is create a unique, post-apocalyptic world unlike anything that I've ever read before and populated it with a cast of characters that I was immediately taken with; by the end of the book, I was reading at hyper speed so I could find out what happened to Leaf and his companions!

I could not help but become totally immersed in Green Thumb; Cardamone writes beautifully and his world building here is amazing.   With every step that Leaf and his companion Scallop take, Cardamone exposes more of the drowned world they journey through, letting it unfold like a poisonous flower.  And danger lurks around every corner!  Slavers, pirates, dive boys; they all want a piece of the innocent Leaf and when his friends are unable to protect him, he has to grow up and in the process learns more about himself than even he knew lay within him.

And let's talk about the boys!  Leaf, Scallop and Hardy are characters I became quite engaged with.  I thrilled to their adventures, despaired when they were in trouble and even became disappointed in them at times.  These are young men that have had to grow up too soon in this harsh world, especially in the case of Leaf, but even in making the wrong decisions,  they can own their fate and keep going.  For better or worse, each one is changed and there is renewal and hope.

I absolutely loved Tom Cardamone's Green Thumb.  In it he creates a world that leaps off the page and that I long for him to explore further, as I believe there are many, many more tales to be told.  The lush language and escalating pace kept me hooked til the end and again, I was so engaged with the characters that I needed to know what happened to them and was both satisfied and surprised by the ending.

I heartily recommend Green Thumb to anyone who enjoys a well written story, alive with vivid imagery and told in a strong, clear voice.  I applaud Tom Cardamone on what he's achieved with Green Thumb and also BrazenHead for giving this wonderful work of speculative fiction a home, so the rest of us might also be cast under its spell!  Happy reading! 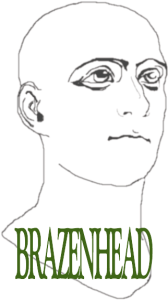