Today on his blog Adam Christopher finally revealed the new cover art for his next book (and his first for Tor) The Burning Dark, PLUS the exciting news that he has inked a deal for two more books set in the same universe!  Here is the final cover: 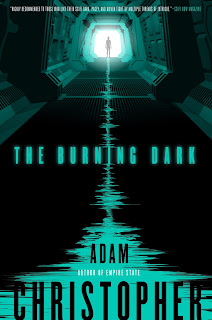 which is pretty awesome and clearly more hard SF than the Empire State books.  Plus, Adam also revealed tentative titles and release dates for the next two book; in March 2015 we can expect The Jovian Conspiracy and a year later in March 2016, The Stars Below.

Tor.com also got in on the shenanigans of the cover art reveal plus offered the alternate covers that were in the running before the final decision was made.

Congratulations to Adam, who has given me many, many hours of reading bliss!  Now I can look forward to many, many more!