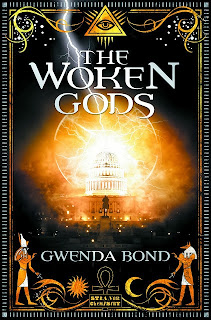 I don't usually read too much Young Adult fiction, unless word of mouth is so rampant that my interest can't help but be piqued.  But when one of my favorite publishers Angry Robot started releasing daring, new YA fiction under its Strange Chemistry imprint, I threw caution to the winds and took a chance.  First came Blackwood by Gwenda Bond, then Shift by Kim Curran and I thought to myself, now here was YA fiction that I could sink my teeth into and really enjoy!  There were no angst ridden teenage girls or pale, tragic vampire teen heartthrobs in sight, just more great speculative fiction  in the glorious Angry Robot tradition, and I started to read all the SC titles that I could get my hands on.

And along came The Woken Gods.

When I was younger, and due to my father's influence, I read alot of books on mythology and ever since then have always enjoyed reading fiction that integrates those familiar myths and legends.  So I was very interested in The Woken Gods from the start.  And I can report that it is a novel that I enjoyed very much; full of enough adventure to keep me satisfied but leaving me wanting more from the promise I feel went unfulfilled.

The premise is awesome: gods from the earth's mythologies are very real and have returned to earth.  All the major pantheons are here and Bond chooses to keep the gods among us as they should be; mysterious, aloof and certainly beyond the understanding of we mere mortals.  In Washington, D.C.,where the novel takes place, there are liaisons from each pantheon that interact with the Society of the Sun, an organization created to deal with the newly awoken gods.

Also in Washington live Kyra Locke and her father, a "librarian" with the Society.  Only, unbeknownst to Kyra, he isn't really a librarian at all and has made off with an ancient relic that the Society would like to have returned to it...

Both the action and fantasy sequences in The Woken Gods are well written, and once the pacing of the book picks up, keep it moving right along.  For me, it is a book with a slow introduction; there is alot of information and back story that Bond has to impart to us to get the party started and sometimes the expositions got to be quite lengthy.  After a few chapters, however, the narrative found its legs and I dived right in.

Kyra and Oz, the two main characters, are well developed and they and their supporting cast kept me engaged throughout the book.  I do feel that The Woken Gods is just the first adventure that we will share with them, since the climax of the book feels open ended and I believe that there is plenty more of this world that Bond can explore.

I would honestly recommend The Woken Gods to anyone who are looking for something different in the YA field, or who are just looking for a great read.  I was entertained and am now left wanting to see what happens next...happy reading!