Via The Mad Hatter's Bookshelf:

"Superhero novels have always been something I look forward to when they aren't focused on traditional heroes from comics. A few of my favorites include Soon I Will Be Invincible by Austin Grossman showing the flip side of things centering on the Supervillian and Ex-Heroes by Peter Climes, which combines a zombie apocalypse and Superheroes. There is also Carrie Vaughn'sAfter the Golden Age delving into what it is like to grow-up without powers among Superheros and Ian Tregillis's Bitter Seeds combining alt history, dark magic, and Nazi Supermen. This year there are a couple books that fit into this vein that have caught my eye. 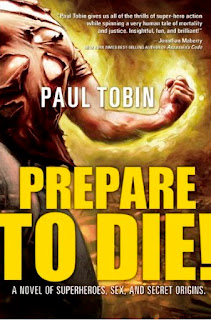 First up is Paul Tobin's debut Prepare to Die!. Tobin has worked in the comics for the past few years most notably on Spiderman, but his first novel looks to take a darker and more introspective tone on the subject of  super ones. The cover definitely screams superpower. Here's the description of Prepare to Die!:


Nine years ago, Steve Clarke was just a teenage boy in love with the girl of his dreams. Then a freak chemical spill transformed him into Reaver, the man whose super-powerful fists can literally take a year off a bad guy’s life.Days ago, he found himself at the mercy of his arch-nemesis Octagon and a whole crew of fiendish super-villains, who gave him two weeks to settle his affairs–and prepare to die.Now, after years of extraordinary adventures and crushing tragedies, the world’s greatest hero is returning to where it all began in search of the boy he once was . . . and the girl he never forgot.Exciting, scandalous, and ultimately moving, Prepare to Die! is a unique new look at the last days of a legend.

Prepare to Die! will be released in June from Night Shade Books. 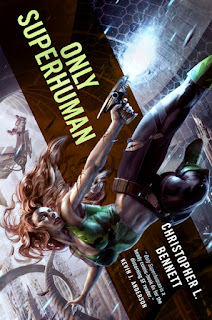 Christopher L. Bennett is best known as the author of many Star Trek and and Marvel Superhero novels so it is no huge surprise that his first non-established property work melds Space and Superheroes with Only Superhuman. Given all the books on post-humans and genetic manipulation in the future I'm actually surprised this hasn't been done before. The slated perspective works really well and I like the art, but I'm not sure it gets across that the character is a superhero. I guess it is a case of spandex = superheroes. Here's the blurb:


In the future, genetically engineered superhumans, inspired by classic Earth comic book heroes, fight to keep the peace in the wild and wooly space habitats of the Asteroid Belt2107 AD: A generation ago, Earth and the cislunar colonies banned genetic and cybernetic modifications. But out in the Asteroid Belt, anything goes. Dozens of flourishing space habitats are spawning exotic new societies and strange new varieties of humans. It’s a volatile situation that threatens the peace and stability of the entire solar system.Emerald Blair is a Troubleshooter. Inspired by the classic superhero comics of the twentieth century, she’s joined with other mods to try to police the unruly Asteroid Belt. But her loyalties are tested when she finds herself torn between rival factions of superhumans with very different agendas. Emerald wants to put her special abilities to good use, but what do you do when you can’t tell the heroes from the villains?Only Superhuman is a rollicking hard-sf adventure set in a complex and fascinating future.

I've always been a fan of the galactic series such as Green Lantern Corp, Guardians of the Galaxy, the Infinity Gauntlet, and especially anything Thanos related so I definitely want to see Bennett's take about Superheroes in space.   Only Superhuman will be out mid-October from Tor. "


I've always been a fan of superhero fiction myself and don't think there's enough of it outside of the comic book medium, so when I saw this post on the Mad Hatter blog I was very excited.  Both novels sound great and I will definitely be on the lookout for them!