Adam Christopher exploded onto the scene with his debut novel Empire State, and  he is poised to make even more noise with his sophomore effort, Seven Wonders.  Seven Wonders is a big budget summer blockbuster action packed superhero movie, all of it brilliantly captured in novel form and with enough plot twists, secret identities and double crosses to satisfy even the most jaded of comic book aficionados.


Christopher sets his story in the "Shining City" of San Ventura, home to the last superhero team on earth, the Seven Wonders, who protect San Ventura and its citizens from the machinations of the last supervillian, the mysterious Cowl.  The Cowl is a criminal mastermind, with multiple powers at his disposal, and along with his sidekick Blackbird, he keeps the Seven Wonders on their toes.  We also meet Tony Prosdocimi, an average Joe who wakes up one morning to discover he himself has started to develop super powers. Christopher tells his tale through the POV of all these characters, and it moves the action along at a fast clip while illustrating the growth and changes each character goes through by the story's big climax.

Seven Wonders  greatly benefits from Christopher's knowledge of comic books; each chapter is as colorful and action packed as the panels would be if he were a comic book scribe.  The writing is concise, the pace is furious, and many of the chapters end with cliffhangers, compelling the reader to plow right along, unable to put the book down.  And the scope of the story gets bigger, keeping the reader engaged as the threat to San Ventura escalates to to a world wide call to arms to earth's other heroes, defunct and retired individuals still ready to band together and help the Seven Wonders protect the planet.

Adam Christopher has written a big love letter to the Golden and Silver Ages of comics with Seven Wonders.  His affection for the medium is evident, and he's taken that tried and true template and created something new that celebrates all the classic comic book tropes while also being a new and exciting entrant in the superhero genre.  It is truly just as exciting and daring as the other superhero blockbusters that preceded it this summer; it has the edge of your seat action of The Avengers, plus the chilling mystery of The Dark Knight Rises. 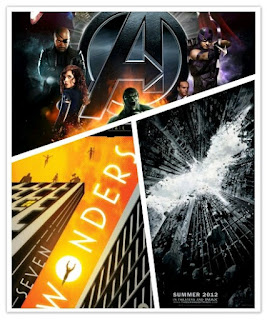 I firmly believe that Christopher has written the standard against which other superhero novels will be held  and is himself now coming into his own super-author powers.  Seven Wonders is a big, colorful joy to read and it shows that it was also a joy to write.  The author's love for the genre is stamped on each page and he has even left room for a sequel (or better yet, sequels!) as any good superhero adventurer should.  YES, believe all the hype, run to your favorite bookstore or click your favorite link and buy this book!  (Better yet, let me help!  BAM!  KA-POW!)  It just may be the most fun you're going to have this summer!