On Episode 13 of the Angry Robot podcast, Mur Lafferty chatted with Robot Overlords Marc and Lee about EMPIRE STATE and they also announced the first of the WorldBuilder projects based on the novel; these will include:

You can listen to the entire podcast here or subscribe to it on iTunes here. 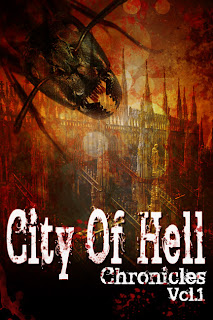 Today Anachron Press released the first volume of the City Of Hell chronicles, a new series of shared world horror anthologies.  Apart from editor Colin F Barnes, all the contributing authors are women, an element the editor thinks brings a unique angle to the mythos.  Here's the book description:

"Volume 1 is the genesis of the City of Hell mythos. This anthology of stories show how the Ant-headed God ‘The Great Maurr’ ascended to rule the Earth and enslaved the population. These are the chronicles of the last few survivors. Only three cities remain: Moscow, London and Hong Kong. All crumbling, dying versions of their former glory.

With stories by six international female authors, and one male, this first volume combines the Old evil and weirdness of H.P Lovecraft with the all out gory horror of Clive Barker.
Subjects range from madness to murder, and from desperation to primal fear. City of Hell Chronicles Volume 1 will take you on a truly disturbing ride into the grim, terrifying landscape of a near future Earth ruled by an army of giant-ants the size of men, human-centipede hybrids and bizarre mutants."
Barnes says the goal of the anthology is to do something different in the horror genre; keep the gore/ickiness factor as well as a human element.  From the early reviews, it looks like Barnes and the rest of the contributors have succeeded!

You can get your copy of the City of Hell Chronicles, Volume 1 here.
Posted by benito at 7:04 PM