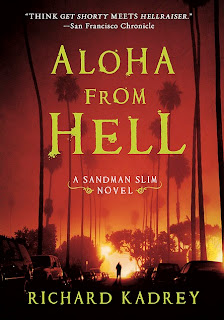 Here is the cover and blurb for Richard Kadrey's Aloha From Hell coming from Harper Voyager on October 18th:

"All is not right in L A. Lucifer is back in Heaven, God’s on vacation, and an insane killer mounts a war against both Heaven and Hell. There’s only one thing Stark can do—go back to the place where it all began, the place he thought he’d never have to see again. Hell.


That’s just step one in a sure-to-be-suicidal plan that includes rescuing his long-lost love, stopping an insane serial killer, and preventing Heaven and Hell from completely destroying the other—or being destroyed by the demonic Kissi.

Sandman Slim has done the impossible before. But even for him, that’s a bad list of business to undertake. And it’s only the beginning..."

A new addition to Kadrey's Sandman Slim series is always cause to celebrate, so keep an eye out for this one in the fall!
Posted by benito at 4:25 PM No comments:

Here is some exciting news from Angry Robot Books!

"We’re absolutely delighted to announce that we have pounced upon the debut novel of British-based New Zealander Adam Christopher.

Adam is well-known to many at the heart of the British science fiction community through his strong presence on Twitter, under the nickname @ghostfinder. It was through reading his posts that AR first became aware of him. When we found out he had ambitions to have his debut full-length novels see print we dove at the chance to check them out.

We loved what we read (and we mean LOVED), and so Lee has signed Adam to AR for at least two novels, starting with EMPIRE STATE.

Empire State is a story of superheroes, and a city divided in two. Detective Rad Bradbury picks up the trail of a murderer, only to discover that the world he has always known is a pocket universe, recently brought into existence by an explosion of phenomenal power. With a superhero on his tail he crosses into a city that bears a remarkable resemblance to his own – a city called New York. There he uncovers a deadly threat to the Empire State, and finds that the future of both realities are at stake.

Angry Robot Editor Lee Harris had this to say...“It’s always a great feeling when you find a new author – especially one with Adam’s talent. Empire State is reminiscent of China Miéville’s The City & the City – the existence of superheroes within Adam’s world serving to underline the very human struggle for survival. We’re pretty excited.”

And debut author Adam Christoher added...“I’ve been following Angry Robot ever since their mothership landed in 2009, and they quickly became one of my favourite imprints. Over the last couple of years they’ve built a brilliant list of authors and titles, and to be part of it all really is a dream come true.”

Empire State will be published in January 2012, with a second superhero-themed fantasy, Seven Wonders, to follow before the end of the year too.


Also, Amanda from Floor to Ceiling Books was fortunate enough to snag the first interview with the newly signed author; check it out here.

Having read Adam's Devil In Chains and being a fan of his blog for awhile and his Twitter posts, this was awesome news to hear!  I'm very excited for him and happy that the Robot Overlords saw his talent and jumped on it; here's to great reading!

Posted by benito at 4:43 PM No comments: 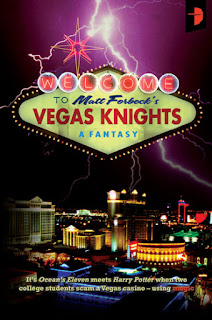 Let me say right from the top that I feel as if I had sat at a happy hour with Matt Forbeck one night and we talked about some of my favorite things; great books, magic, Las Vegas, caper movies, zombies and then he turned up the next day with THIS!  VEGAS KNIGHTS is one of the best Urban Fantasy books I've read in a long time; it's cleverly written, fast paced and wonderfully fresh.

Jackson and Bill are two college students who come to Las Vegas on spring break to try to win big at the casinos; the difference here is that they want to do it using magic.

Of course, they get caught.  And from here Matt Forbeck lets us in on the biggest secret of Las Vegas, that it's not the Mob that runs the city but is in fact several factions of magicians.  Forbeck reveals this secret history of Vegas bit by tasty bit while keeping the action coming fast and furious.

For me, VEGAS KNIGHTS succeeded on so many levels; the writing is breezy and natural, the chareacters are likable, the pace of the novel moves at a fast clip and I can see why several reviewers have mentioned the cinematic quality of Forbeck's writing; the neon and glamour of Las Vegas jump off the page and you can hear every bell and whistle from the casinos.  Yes, VEGAS KNIGHTS is begging to be a big, splashy Hollywood blockbuster.

I think the only quibble I have is that the story wrapped up too soon for me; but again, that's a minor complaint since I found the book to be so damn good!  It is my sincere hope that Matt Forbeck will continue Jackson and Bill's excellent adventures in Vegas, since I think he's come across a goldmine here with plenty of stories left to plumb from it.  And if he does, I will be all in!

Posted by benito at 3:44 PM No comments: