I am loving that werewolves are making a comeback in horror fiction!  So it was with huge excitement that I plunged into Rick R. Reed's new book, THE BLUE MOON CAFE. 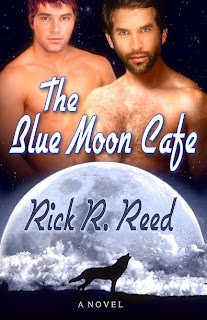 Terror has struck the gay community of Seattle.  Someone (or something) is killing gay men right in the heart of the gay district of the city and the murders are so violent that the authorites have no clue as to who is committing the crimes...or if the killer is even human.

Thad is unemployeed and single and is becoming dissatisfied with the recent downturn his life is taking.  Then one day, he wanders into The Blue Moon Cafe, a new Italian bistro that's just opened.  Here he meets Sam Lupino, the restaurant's owner, who is everything that Thad wants in a man-handsome, dark and passionate.  The attraction is mutual and after a dinner that satisfies one appetite and whets another, Thad takes Sam home.  The sex is rough and incredible and Thad  finds himself falling for Sam...but Sam is full of secrets.

Thad also meets Jared who is blond and sexy, and while Thad finds Jared attractive, he is too hung up on Sam and getting to the bottom of where Sam disappears to during the full moon to give in to that attraction...and the violent killings are continuing, and striking closer to home.

This was a great read and that is due in large part to Rick's expert handling and blending of the two storylines he has going here; the romance building between Thad and Sam is fraught with passion but also mystery since Thad feels Sam has secrets he's not telling him.  Then there's also the snapshots we get into the killer's mind as it continues it's bloody attacks on the gay men of Seattle.  Rick early on creates a creepy suspense and builds on it throughout the tale; he also captures Thad's confusion and insecurity about Sam equally well and as the book races to it's conclusion, secrets are revealed and more lives are put in danger when  the two storylines converge in a bloody yet satisfying climax.

I believe there is more to the story then what Rick's revealed to us so far.  There is definitely room for a sequel and then there's the question of a certain character that comes to the rescue just in the nick of time.  Let's hope Rick doesn't leave us hanging for too long and we hear more from Thad, Sam and Jared very soon.

I highly recommend this book for you horror and werewolf lovers out there.  It will be a great addition to your library.  You can buy THE BLUE MOON CAFE here http://amberquill.com/AmberAllure/BlueMoonCafe.html .

And I also remind you to keep a lookout for ON THE EDGE, Rick's forthcoming collection due out this summer! 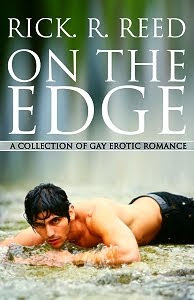