Review: A Demon Inside by Rick R Reed (MLR Press) 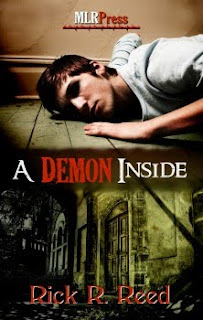 It's no secret that I admire author Rick R Reed.  I've been a fan of his work for over a decade now and his writing, like the man himself, keeps getting better.

A DEMON INSIDE continues Rick's foray into combining horror/thriller with m/m romance and it does it well.  Rick slowly but surely builds the suspence while also creating a budding romance that causes great internal conflict for the protagonist.

We meet Hunter Beaumont just before the death of his grandmother.  She has been the loving, protective center of his young life and her passing sets him adrift in a world he's ill equiped to deal with.  Since the age of 5 when his parents were brutally killed, he'd lived with his grandmother and to protect her grandson from such a terrible world, she had seen to it that he'd led a very sheltered life.  He'd never went to a public school nor had any friends; she was all he had.  With her dying breath she makes Hunter promise to destroy Beaumont House, a place Hunter has never heard of.

The mystery is solved when Hunter learns of the old, decrepit house his family hadn't visited in generations.  To try to make some sense of his life and to get away from the city where he is feeling increasingly alone, Hunter finally moves up to Wisconsin to Beaumont House and comes to realize just why his grandmother wanted him to destroy it.

In THE BLUE MOON CAFE, Rick ratcheted up the tension by giving the reader glimpses into the killer's mind and it really drove the action.  Here, the build up is slower and he uses Hunter's self imposed exile to great effect; all the incidents that start to occur in the house we only get to see  from Hunter's perspective. Hunter distrusts everyone so much and keeps himself so isolated that soon he's unable to tell reality from nightmare-and so are we.  Has someone been in his house?  Is his neighbor, also living alone in this remote area, watching him from afar?  Or can Beaumont House really be haunted?

Rick makes Hunter's descent into hysteria gripping and very chilling; there are passages here that literally made me stop to catch my breath.  He keeps us guessing until the end about whether or not everything is in Hunter's mind and when the climax comes, it is both terrifying and explosive.

Rick R Reed is on a roll, turning out some excellent work lately and A DEMON INSIDE is the latest triumph by a prolific writer and a worthy addition to the haunted house canon of horror as well.