The Further Adventures of STEAMDUCK!

From the creator's of Her Majesty's Explorer: a Steampunk bedtime story comes word that Steamduck is getting his own book, Steamduck Learns To Fly !!

"Author Emilie P. Bush and illustrator William Kevin Petty are proud to announce the release date of the follow up to their bestselling children's book Her Majesty's Explorer: a Steampunk bedtime story.  On October 10, 2012, the waddling hero of HME - Steamduck - returns with another adventure in Steamduck Learns to Fly!

In this new tale, the plucky mechanical duck discovers that REAL birds do more than swim. He turns to his old friend and maker - the Otter - to learn a few things about flying. They try and fail with propeller contraptions, hot air balloons and more. Despite all the mishaps, the pair eventually defy gravity and take to the sky.

“With the success of Her Majesty’s Explorer, we thought long and hard about where we wanted to go with our darling characters. Steamduck has quite a following, and we wanted to make sure he was true to his heroic nature. Kevin is a pilot, and a huge fan of flight history, so we went with those ideas for our second Steamduck story,” says Emilie P. Bush.  “So, as he tries and fails with many different types of flight, he never gives up, and he never stops learning.”

Fans wanting to keep up with details and sneak peek images from Steamduck Learns to Fly! can follow the project on Facebook – as Steamduck has his own fan page. http://www.facebook.com/pages/Steamduck/108061409309296 "

I enjoyed Her Majesty's Explorer very much and especially the character of Steamduck, so this was great news!  I'm very much looking forward to the new adventure! 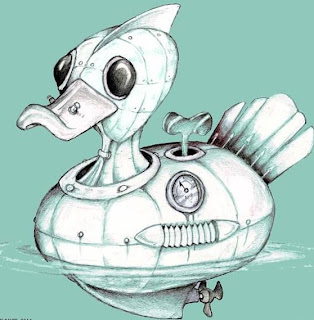